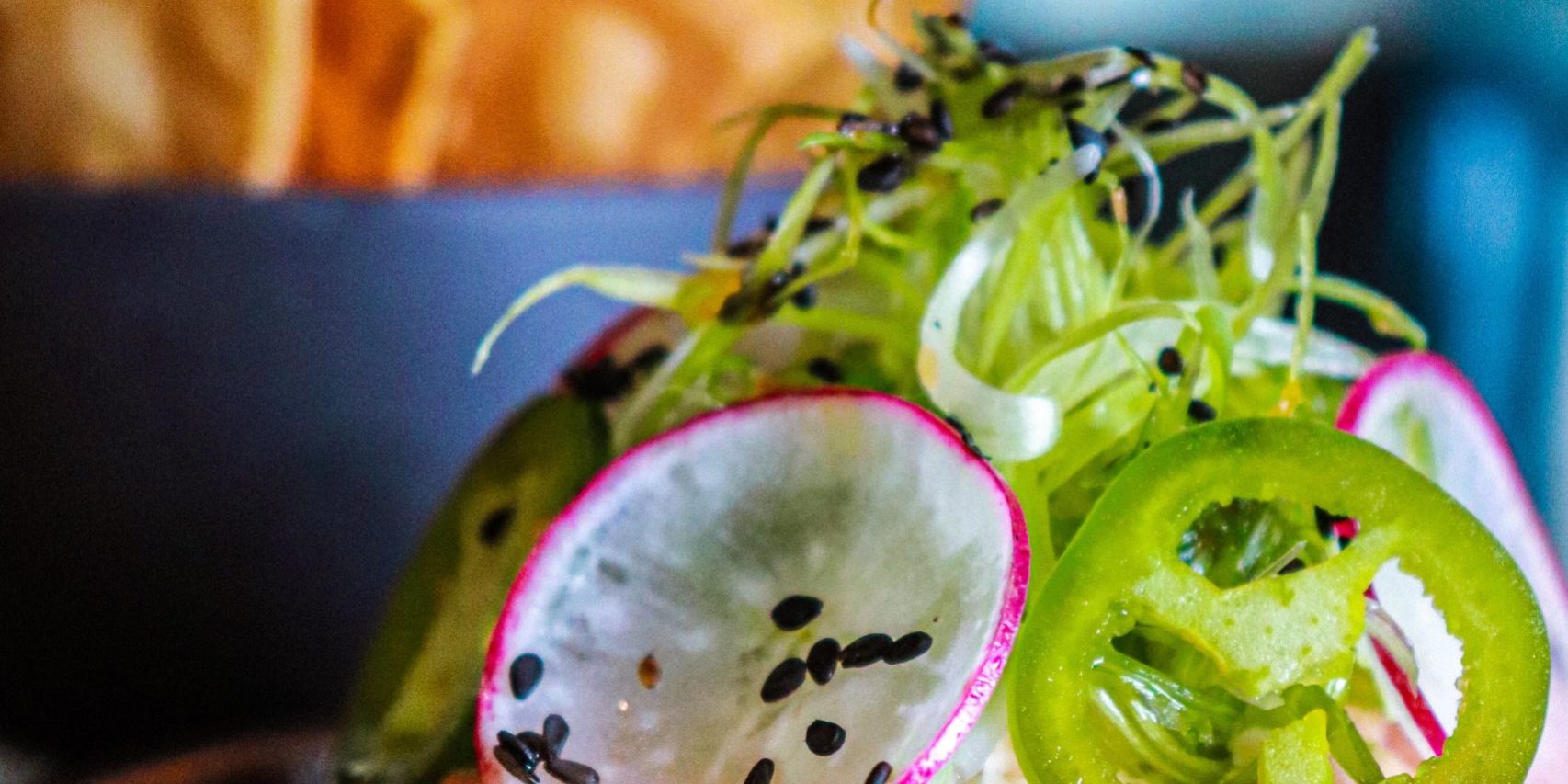 Ceviche is fresh raw fish marinated or “cooked” in lime juice, most often with onion, tomatoes, coriander and salt.  It hails from the coastal regions of Central and South America, popular from Mexico down to Peru and beyond. There are many versions, and depending on where you are, it will take on the local flavours.  It’s the sort of dish that people don’t ordinarily think of as simple to make at home, so restaurants readily charge a small fortune for it.

Today ceviche is traditional all along the Pacific Coast of the Americas. Whether or not it originated in Peru, ceviche is the Peruvian national dish. Some form of it has been eaten in Peru for almost two thousand years.

There is also a Philippine ceviche called Kinilaw that predates the Colonial Period. The Pacific Spanish galleon route sailed between Acapulco, Mexico and Manila, Philippines, so ceviche may originally be Filipino. The combination of sour, salty and spicy flavours tastes very Southeast Asian.

Ceviche may be Moorish too. The rationale for this idea is that lemons and limes came to the Americas from Europe. Arab traders brought lemons from China and limes from India and Indonesia.  Spanish colonisers sailed from Cádiz in Andalusía, Spain. Some say that Moorish women who travelled with the colonisers brought ceviche to Lima. Ferran Adrià, the Spaniard who is considered one of the world’s top chefs, says that ceviche is Peruvian. It doesn’t really matter. Our common humanity is what is special.

Is ceviche safe to eat?

Ceviche, if made with fresh fish is absolutely safe to eat. Think sushi!  The lime juice cooks the ceviche on the outer edges and the longer it marinates the longer it “cooks”. How do you know if the fish is fresh enough to eat raw? It won’t smell fishy. It will smell clean and fresh with have a subtly sweet flavour.

Here’s a comparison of the fish immediately after tossing with lime (fish is still translucent), then 5 minutes later, it’s turned white because it’s cooked!

Fish to use in ceviche:

The ONLY fish you should use for ceviche is sashimi-grade fish that is suitable for raw consumption. It is not enough to just buy “fresh fish” from the stores – this usually just means it hasn’t been frozen then thawed. It does not mean it’s fresh enough to eat raw. You need to check that it is “sashimi grade”. As a general rule, fish that is tender and not chewy when raw will make better ceviche. This is because the fish is cut chunkier compared to the fine slices used in say fish carpaccio or sushi. Thus fish like snapper, grouper, some cods, flounder, which can be sometimes a bit tough eaten raw, are less suitable.

There is no one way to make ceviche, and there is no single “best fish” for ceviche because it’s driven by the types of seafood available. There are plenty of options, here are the most common ones for you:

There are so many ways to serve ceviche!  For example

Try out our recipe below and let us know what you think.

This low fat, low carb, gluten free ceviche recipe is really easy to make and incredibly tasty too, serve as an appetiser for parties and gatherings.

This website uses cookies to improve your experience while you navigate through the website. Out of these cookies, the cookies that are categorized as necessary are stored on your browser as they are essential for the working of basic functionalities of the website. We also use third-party cookies that help us analyze and understand how you use this website. These cookies will be stored in your browser only with your consent. You also have the option to opt-out of these cookies. But opting out of some of these cookies may have an effect on your browsing experience.
Necessary Always Enabled
Necessary cookies are absolutely essential for the website to function properly. This category only includes cookies that ensures basic functionalities and security features of the website. These cookies do not store any personal information.
Non-necessary
Any cookies that may not be particularly necessary for the website to function and is used specifically to collect user personal data via analytics, ads, other embedded contents are termed as non-necessary cookies. It is mandatory to procure user consent prior to running these cookies on your website.
SAVE & ACCEPT