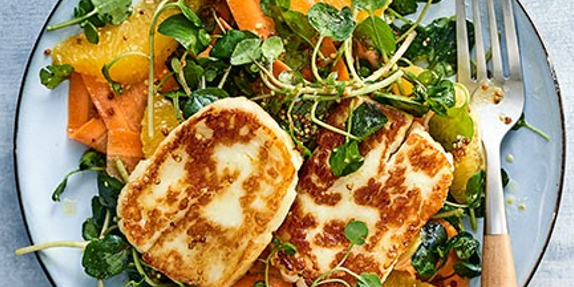 Tired of heavy Christmas food, how about making some delicious winter salads, yes salads in winter! Try some of our tasty, healthy suggestions and tuck in, these warm and cold dishes include ingredients such as beetroot, pear, oranges, fennel, pomegranate, feta and more.

Winter Salad with Fennel and Pomegranate

Leave out the anchovy to make this vegetarian.

A pretty winter salad with fresh shaved fennel, pomegranate seeds and celery root with a creamy lemon dressing which will take you through the cold days with freshness, crunch and natural sweetness.  Not a fan of anchovy or want to keep this vegetarian? Just omit the anchovy and add a pinch or two more salt…

To make the dressing, put the lemon zest, juice, vinegar, salt, garlic and anchovy in a blender or mini food processor, or mix together in a small bowl.

Add crème fraiche and olive oil and blend/process until smooth and creamy or whisk by hand. Taste for seasoning and add more salt if needed.

Peel the base of the fennel bulb with a vegetable peeler to remove the tougher outer layer. Slice the fennel very thinly using a sharp knife or shave on a mandoline. Add to the salad bowl.

Pour half the dressing over the salad and toss gently.

Transfer the salad to a serving plate and arrange the reserved radicchio leaves around the salad. Drizzle with additional dressing and sprinkle with pomegranate seeds. Garnish with fennel fronds.

Serve this halloumi, carrot, orange and watercress salad with a mustard and honey dressing for an easy lunch or starter. It takes just 20 minutes to make and delivers one of your 5-a-day.

Cut the peel and pith away from the oranges. Use a small serrated knife to segment the orange, catching any juices in a bowl, then squeeze any excess juice from the off-cut pith into the bowl as well. Add the mustard, honey, vinegar, oil and some seasoning to the bowl and mix well.

Using a vegetable peeler, peel carrot ribbons into the dressing bowl and toss gently. Heat a drizzle of oil in a frying pan and cook the halloumi for a few mins until golden on both sides. Toss the watercress through the dressed carrots. Arrange the watercress mixture on plates and top with the halloumi and oranges.

Put the beetroot in a large pan of water (if you have a mix of colours, cook in separate pans as the colours will bleed). Bring the water to a boil, cover and leave to simmer – about 20-40 mins, depending on the size of the beetroot. Use a skewer or small sharp knife to check that they’re tender in the centre (try not to poke too often or they’ll bleed all their juices into the water).

Drain the beetroot and leave to cool in a colander. When cool enough to handle, peel away the skins, root and stalks, then roughly chop or slice the beetroot.

Make the dressing by melting the membrillo in the pan with the chorizo oil, sherry vinegar and 1 tbsp lemon juice. Mix in the olive oil and season.

Core and thinly slice the pear, toss with a little lemon juice to stop it browning, then arrange on a platter with the beetroot, chorizo and almonds. Toss together with the dressing, if you like, or serve the dressing on the side. Sprinkle over the parsley and manchego and serve immediately.

This warm winter salad has it all: colour, flavour and texture. Sweet blood oranges, sharp feta and nutty Jerusalem artichokes combine to create a beautiful side or seasonal meze.

Heat oven to 200C/180C fan/gas 6. Toss the artichokes, olive oil and half the orange juice in a large roasting tin. Season well, and roast for 45 mins, turning halfway through, until tender and turning golden.

Meanwhile, use a serrated knife to remove the skin and pith from the remaining oranges, then segment the flesh or cut into thin wheels. Put the Sherry vinegar, remaining orange juice, the extra virgin olive oil and honey in a jug and whisk to combine. Season to taste.

Scatter the nuts and cumin over the artichokes and roast for another 5 mins until the nuts are just golden and the cumin aromatic. Remove from the oven, cool briefly, then gently fold in the orange, feta, parsley and dressing. Serve in the tin or pile onto a platter.

Make a delicious and seasonal salad with this recipe, which you can customise to your liking.

Preheat the grill to high and line the grill rack with foil. Halve the cheese to make two discs. Halve and core the pear, cut each half into slices and arrange in two piles on the foil. Lightly brush the pears with oil then top each pile with a cheese disc (cut side up) and grill for a few minutes until lightly golden and bubbling. Scatter with the nuts and grill for a minute or so more.

Whisk the cranberry sauce with the oil and lemon juice and season. Arrange salad leaves on two plates. Put the pears and cheese on top. Spoon over the dressing, scatter over any stray nuts and eat right away with crusty bread while the cheese is still deliciously runny.