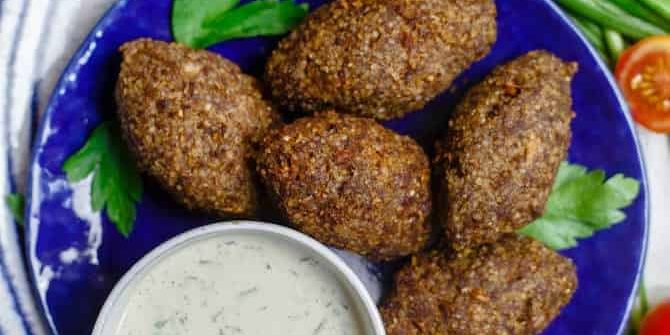 This week we are celebrating Lebanese cuisine. Lebanese food is among the healthiest cuisines in the World because of the ingredients and the way the food is cooked with low-fat options such as hummus, tabbouleh and other dips and salads.

Lebanese cuisine combines Turkish, Arab, and French cooking styles. Characteristics include the use of lamb (introduced by the Ottomans); the abundant use of nuts, especially almonds and pine nuts; and dressings made from lemon juice.

If you fancy a quick and easy meal we have a delicious 2-course Lebanese inspired recipe box available on our 5adaybox or Heritage at Home websites to buy.  Check out our next blog for sweet Lebanese dishes.

Kibbeh is a unique mixture of soaked bulgur wheat and other ingredients, typically lamb meat, and it is also considered the national dish of Lebanon. Fragrantly spiced and eaten as a snack for casual or celebratory meals, Kibbeh can be raw, baked, fried, stuffed, or prepared in a vegetarian version, stuffed with potatoes, pumpkins, and tomatoes.
It is typically served with mint leaves and drizzled with olive oil. The word kibbeh stems from an Arabic verb meaning to form into a ball or a circular shape. A fried variety of kibbeh, called kibbeh nabilseeyah is shaped into a ball, stuffed, then fried in oil.

For the Kibbeh (the dough that forms the shells)

For the meat filling

Cover a fine mesh strainer with a light cloth (a cheesecloth, if you have one). Add the bulgur wheat, then place the strainer into a bowl filled with water. Let the fine bulgur wheat soak in the water for 15 minutes, then pull the cloth, holding the bulgur, and squeeze all the water out. You may do this a couple of times until you are sure the bulgur is rid of water. Set aside for now.

Now make the kibbeh. Put the onion, mince beef, spices and pinch of salt into the bowl of a large food processor. Process until the meat is very finely ground almost into a paste. Transfer the meat mixture into a large bowl and add the bulgur wheat. Use damp hands to combine the bulgur with the meat mixture to make a dough. Cover and refrigerate until later.

Now make the filling. Heat about 1 tbsp olive oil in a skillet or frying pan. Sauté the onion until just golden, then add the minced beef. Cook over medium heat, stirring occasionally until the meat is fully browned. Add the toasted pine nuts, spices, and salt and pepper. Stir to combine. Remove from the heat and set aside to cool.

Remove the kibbeh dough from the fridge.

To stuff the kibbeh, you need to have damp hands. Place a small bowl of water next to you. Prepare a baking tray and line it with parchment paper.

With both the bowl of kibbeh dough and the filling near, you can begin stuffing the kibbeh. Dampen your hands with some water, take a handful of the kibbeh dough (about 2 tbsp or so) and form into somewhat of an oval-shaped disc in the palm of one hand. Use your finger to make a well in the middle of the disc, and gradually hallow the disc out to make a larger well or hole for the filling. Using a spoon, add about 1 tablespoon of the filling. Seal the dough on top and, using both hands, carefully shape it into an oval (football-type shape). Place the stuffed kibbeh on the baking tray lined with parchment paper. Repeat the stuffing steps until you run out, be sure to have damp hands throughout.

Chill the stuffed kibbeh for 1 hour.

Heat the oil in a deep frying pan to 350 degrees F (you’ll want the oil hot enough that you can see some gentle bubbling, but not too hot where it will burn the kibbeh shells). Deep-fry the kibbeh in the hot oil, in batches being careful not to crowd them until the kibbeh shells are brown (about 5 minutes or so). With a slotted spoon or tongs, carefully remove the kibbeh and place them on a pan lined with a paper towel to drain. Repeat until you have fried all the stuffed kibbeh.

Tabbouleh is a colourful Lebanese national dish that is usually considered a salad, with a crunchy and chewy texture, made with fresh, finely chopped parsley leaves, olive oil, bulgur wheat, and chopped mint leaves as a base. It originated in the mountains of Lebanon and Syria, where edible herbs that are used in tabbouleh were consumed by Arabs since Medieval times.

Usually served as an appetizer, it is sometimes accompanied by pita bread, baba ghanoush, or hummus. Chopped red tomatoes, diced cucumbers, fresh lemon juice and minced onions can be added to the salad, imparting a tangy flavour. It is best to refrigerate tabbouleh for a few hours before serving to improve its taste. Its refreshing flavours are ideal for a hot summer day, while bulgur provides a rich source of fibre, protein, and minerals, making tabbouleh one of the healthiest food options in Lebanon. Tabbouleh is so popular that it even has its own day, celebrated every year on the first Saturday in July.

Rinse the bulgur wheat in a sieve until the water runs clear. Drain well, then transfer to a bowl. Pour over 200ml boiling water, cover with cling film and leave to soak for 30 mins or so while you prepare the rest of the ingredients.

Keeping the parsley in a bunch, chop the leaves roughly. Don’t worry about the inclusion of some of the stalks; this all adds to the flavour. Now do the same with the mint. Put the chopped herbs in a large bowl and add the tomato and spring onion.

Thoroughly drain the bulgur, then add to herb mix, along with lemon juice and olive oil. Mix thoroughly, season and serve.

So, in Arabic, the word “fattoush” is derived from “fatteh” which literally means “crumbs.” As you can imagine, this Fattoush Salad is basically a hodgepodge of pita bread that’s been seasoned then fried (or toasted) in addition to other vegetables that are in season. For that reason, there are no rules when it comes to the vegetables you use in Fattoush! It’s a great base recipe that you can build upon and dress up how you’d like.

Fry the pita for 5-7 minutes until the pieces are crispy and golden in colour. (Alternatively, bake the pita bread at 200’C for 5-10 minutes.) Set the fried bread aside.

Add the lettuce, tomatoes, cucumbers, green peppers, radishes, green onions and parsley to the large bowl of dressing and toss to combine.

Add the fried pita bread to the salad immediately before serving and gently toss again.

Serve chilled or at room temperature.

If you’ve never made hummus before, then you are totally missing out. Homemade Lebanese hummus is super easy to make, tasty, healthy and requires just a few simple ingredients.

The unique flavour of hummus comes from tahini, a sesame seed paste. You can usually find it in the ethnic section of your supermarket.

When served, it is typically dressed with a drizzle of olive oil and is then used as a dip for vegetables or a flavourful filling for flatbreads such as pita. Even today, not much is known about its origins, although the earliest mention of hummus dates back to 13th-century Egypt.

Remove the skins from the chickpeas if you want a smoother hummus (it is laborious but I find it’s worth the hassle and if a few of you join in it’s done in no time).

Put the chickpeas in the bowl of a food processor and blend for 1 minute.

Add the tahini, extra virgin olive oil, lemon juice and keep mixing until it becomes creamy. Stop to scrape down the sides once or twice.

Add the garlic, salt and cumin and blend for 3-4 minutes until thoroughly mixed and smooth.

If it’s too thick add 1 tablespoon of water until the consistency is perfect.

Taste and adjust the seasonings, adding more salt or lemon if needed

Place in a shallow bowl, drizzle 1 tablespoon of olive oil, garnish with a few chickpeas and sprinkle with paprika (optional).

Serve the homemade Lebanese hummus immediately with flat bread or cover and refrigerate.

There are MANY recipes out there for the dough and the stuffing, this is my favourite. You may find the addition of tahini, pomegranate molasses and labneh (drained greek yoghurt) a bit strange but they do transform the taste of the meat and take it to the next level..still, they are entirely optional.

To make the dough

To make the stuffing