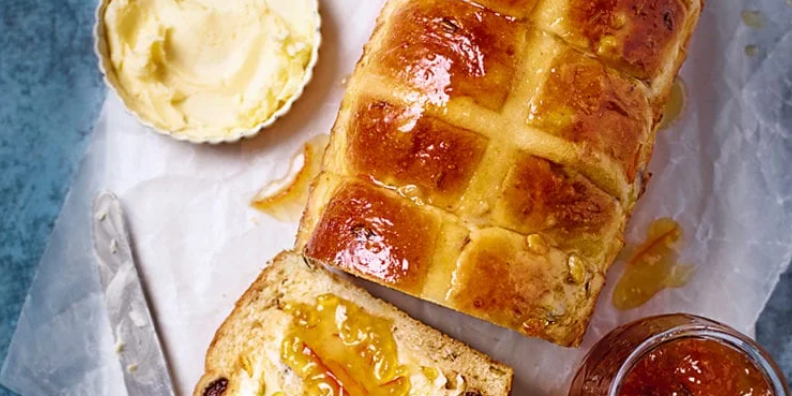 Easter is just around the corner, and it’s the perfect time to start baking some homemade treats! We have put together 5 Easter-themed baking recipes which we hope you’ll be able to enjoy with all the family.

Don’t forget, until the 18th April, we are running a Half-term Easter Bake Off Competition on Facebook & Instagram. You can find the competition details on our Facebook page.

We also have a Children’s Easter Baking Bag available from our website which includes basic baking ingredients, a recipe suggestion sheet and an Easter activity sheet.

A twist on the Easter tradition of hot cross buns, this orange and aniseed hot cross bun loaf is best served sliced with butter and marmalade.

For the cross topping

Mix the sponge ingredients with a large pinch of salt and 80ml room temperature water in a small bowl to form a stiff dough. Cover with cling film and leave for 12 hours at room temperature. It should more than double in size.

The next day, mix the orange zest and juice, candied peel, aniseed/fennel seeds and raisins/currants in a mixing bowl, then set aside to soak.

Weigh 190g of the sponge mix, tear it into pieces and put in the bowl of a stand mixer with a dough hook attached. Add the flour, milk, 45g egg, salt, yeast and 135ml room temperature water.

Mix on a low speed for 2 minutes, scrape the sides of the bowl down with a spatula or palette knife, then mix for another minute or so until all the dry ingredients are incorporated.

Increase the speed to medium. After about 5 minutes, the dough should be smooth and elastic. If it’s still looking a bit ragged or uneven, keep mixing until smooth.

By this point, the dough should be ready for the sugar and butter. Still on a medium speed, add the sugar to the bowl, bit by bit. The dough will become softer and stickier. Carry on mixing until the dough comes back together (this should take 2 minutes or so).

Cut the butter into 4-5 pieces and add them to the bowl, then mix again on a medium speed for 2 minutes or so until fully incorporated (scrape down the sides of the bowl if necessary).

Finally, add the soaked fruit mixture to the bowl and mix at a low speed until well incorporated.

Transfer the dough to a lightly oiled bowl and cover with cling film or a clean tea towel. Leave to rise at room temperature until at least doubled in size (about 1½ hours).

Once the dough has risen, turn it out onto a lightly floured work surface and knock back (knead gently to remove any large air pockets). Divide into 6 equal portions, about 215g each, then shape into tight dough balls. Put
3 balls, side by side, into each of the prepared loaf tins. Cover the tins with a clean tea towel and leave to prove for 1½-2 hours.

While the loaves are proving, make the cross topping. Put all the ingredients except the marmalade in a bowl with a pinch of salt. Add 50ml cold water and mix well until smooth. Scrape into a piping bag and set aside. Heat the oven to 200ºC/180ºC fan/gas 6.

When the dough has at least doubled in size, brush generously with beaten egg all over, then pipe the topping in 1 long stripe down the centre, followed by 3 short ones across the top of each dough ball.

Bake for 25 minutes until the tops of the loaves look golden. Just before the baking time is up, warm the marmalade in a small pan with a little water to make a thick syrup. As soon as the loaves come out of the oven, remove them from the tins, transfer them to a wire rack and brush them all over with the glaze. Leave to cool before slicing.

These cheesecake brownies have been given an Easter twist by using the cheesecake mix to create fried eggs. Watch Courtney’s video to see how easy these fun treats are to make!

Heat the oven to 180C/ fan160C/gas 4. Melt the butter, chocolate, sugar in a medium-large saucepan, stirring occasionally, until the chocolate and butter have melted. Remove from the heat and leave to cool slightly.

Whisk 3 eggs into the melted chocolate mix, one at a time, whisking well to bring the mixture back to a glossy consistency. Add 1 tsp vanilla and a pinch of salt then add the flour and mix until just combined and glossy.

In a separate bowl, beat the cream cheese, sugar, 1 tsp vanilla and egg together until smooth.

Pour the brownie batter into a greased and lined brownie tin and randomly blob your cheesecake mixture around to create fried eggs. Then, colour your remaining cheesecake mix with a drop or two of yellow food colouring and stir to get a consistent colour. Add your yolks on top and use the leftover cheesecake mix to dot around.

Using a skewer or small knife, swirl the mixture around the fried eggs to create a marbled pattern.

Bake for 25 minutes until the top is set and starting to crack. Cool in the tin then place into the fridge for 30 minutes. Remove from the fridge, slice and serve.

These Easter shortbread biscuits are topped with a homemade passionfruit curd, perfect with a cuppa.

Using an electric mixer, beat butter and icing sugar for 5 minutes or until light and fluffy. Sift over plain flour and cornflour. Stir to combine. Turn dough out onto a lightly floured surface. Knead until smooth. Wrap in cling film. Put in the fridge for 20 minutes.

Using a rolling pin, roll out the dough between 2 sheets of baking paper until 3mm thick. Using a 5.5cm x 7.5cm oval cutter, cut 24 ovals from the dough, re-rolling and cutting trimmings. Place, 2cm apart, on prepared baking trays. Refrigerate for 10 minutes. Using a 3cm round cutter and the picture as a guide, cut rounds from 12 ovals and discard. Bake for 12 to 15 minutes or until just firm to touch, but not browned. Stand on trays for 5 minutes.

Meanwhile, make Passionfruit Curd: Place egg, egg yolk, sugar and cornflour in a small saucepan. Whisk to combine. Add butter and passionfruit pulp. Place over medium heat. Cook, stirring with a wooden spoon, for 7 to 8 minutes or until mixture thickens and coats the back of the spoon. Remove from heat. Strain through a sieve into a heatproof bowl. Discards seeds. Stand for 5 minutes. Cover surface with cling film. Set aside to cool completely. Transfer to a wire rack to cool completely.

Transform a simple sponge into this showstopping Easter bake with layers of white chocolate frosting and a semi-naked finish. We’ve decorated ours with broken white chocolate eggs and crunchy mini eggs, but you can get creative with your favourite Easter treats.

Heat the oven to 190C/fan 170C/gas 5 and line 2 x 20cm deep, round cake tins with baking paper. To make the cake, beat together the butter and sugar until light and fluffy. Crack in the eggs, one by one, and mix between each addition until combined. Gradually mix in the flour followed by the baking powder until just combined. Slowly add the milk and mix to combine.

Divide the batter equally between the lined cake tins and bake in the oven for 45-50 minutes or until a skewer inserted into the middles comes out clean. Take out of the oven and leave to cool in the tins for at least 10 minutes before transferring to a wire rack to cool completely.

Once the cakes are cool, cut both in half with a serrated knife so you have four round, evenly sized sponges.

To assemble the cake, evenly spread the buttercream on top of each sponge and sandwich the cakes together. With a thin layer of buttercream, create a crumb coating by icing the sides and top of the cake. Leave to set in the fridge for 10 minutes. Using a palette knife, spread the remaining buttercream over the entire cake, filling in any gaps between layers and creating a smooth surface. Put the cake in the fridge for 30-40 minutes or until the icing is firm.

Finally, once the cake is set, top with the broken white chocolate eggs and mini eggs.

Grate your carrots (peel first and chop the ends off), and leave to the side. You need 175g of grated carrot to be the weight at the end.

Whisk together the sunflower oil and eggs.

Add in the grated carrots and sugar, and mix again.

Add in the flour, mixed spice, ground ginger, and cinnamon, and bicarbonate of soda. Try not to over mix it.
Split the mixture between the 12 cupcake cases, and bake in the oven for 20-22 minutes!

Beat your butter on its own for a few minutes to loosen it.
Add in the icing sugar, and beat again – I beat this for about 5 minutes, to make it really smooth.
Add in the cream cheese, and vanilla and beat. At first, it may look a little weird, but just keep on beating for a few minutes. It can go through a lumpy stage first, but eventually, the lumps beat out and it’s smooth and thick!
Decoration
If you have one, add a piping tip to your piping bag and pipe the frosting onto the cupcakes.
Sprinkle over some chopped walnuts, and a carrot decoration!