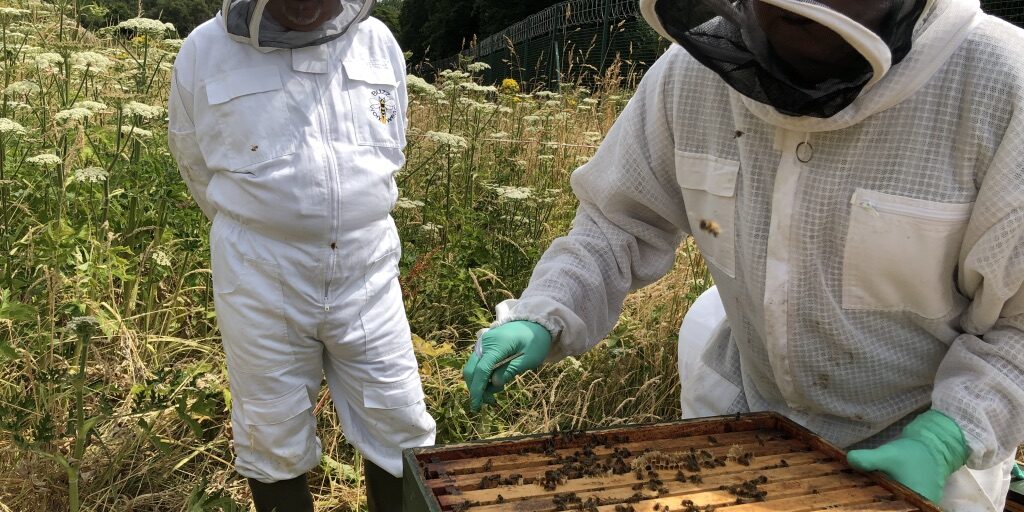 So on a cooler than usual September day we ventured to Wilsford to meet with Dr Mark Fife, a Head of Biotechnology by day and a beekeeping enthusiast in his spare time, Mark has been bee crazy for over 15 years and his love and passion for it shines through, he compares keeping his bees like being like a farmer, his bees are incredibly well looked after and completely cared for.

Mark currently has 15 hives in total with 4 based in his back garden and the outstanding 11 are situated in apiaries 5 miles away on the Salisbury Plain.

Today we were able to get quite close to the hives without protective gear and see the bees busy flying in and out the hives with their legs laden with pollen.

Mark gets around triple the amount of honey crop of some of his beekeeping friends as there are so many different flowering species and diversity on the plain, flowering between February and November so his bees are still producing later in the season whereas other’s seasons end in August.  From his 4 hives in his garden alone, he produces around 1,200 jars (to compare his 11 hives produce around 600 jars)

So why are bees so important?

Of the 100 crop species that provide 90% of the world’s food, more than 70 are pollinated by bees.  It’s about the diversity of plants and not about having lots of fields of rape.  “I like the analogy of it being like feeding a child only white bread for a month – they will become ill, and it’s the same for the bees.  Bees need plant diversity for their own immunity to fight viruses”.

Beekeeping can be as simple or as complicated as you like, I am fascinated by what goes on in the hive.  In July the Queen lays roughly 2,000 eggs a day which is eight times her body weight.  She is fed by her attendants 24/7.  Her pheromones control the colony but the colony also controls her, they even starve her if they want to swarm.  Swarming is a nuisance for beekeepers as 60% of the bees can fly off to a new home.  This would mean no honey is produced for the next month or so while the hive rebuilds its numbers.  The queen bee lays eggs in a queen cell to make a new queen.  Worker bee cells are horizontal to the ground but queen cells are vertical and surrounded by wax which the workers cap over 20 days as the developing larva grow.

No, they don’t. During the winter months, there can be a minimum of 10,000 bees in a hive clustering around the queen to keep her warm and slowly eating their way through their winter stores of honey.

Unlike some commercial hives, Mark always leaves plenty of honey for the bees and never replaces with sugar water.

In Spring the first crop of honey comes from hedgerows and includes willow, crocus pollen, followed by apple blossom and other hedgerow pollen.  Then comes the rape – there is so much nectar from that crop that the bees actually become quite feisty (a bit like when children have eaten too many sweets!) You can often see the bees flying back and forth and they can become quite aggressive. The earlier season honey tends to be creamed or set honey, this is due to the high glucose content which granulates quicker.

The Summer honey has a slight haze and is much runnier, this is due to the high levels of fructose (fruit sugar which doesn’t crystallise), from the more diverse range of flowers on the plain.

Are there any health benefits to eating honey?

When I moved to Wiltshire I suffered from an allergy to oilseed rape plants, now having eaten my own local home over the past years I no longer suffer from this allergy and other local related allergies.

For the best results take a couple of teaspoons of honey a day for several months prior to the pollen season, its equivalent to undergoing a whole series of allergy desensitization injections.

My favourite way to eat it is one that the local Charlton Cat serves up and is a variation on a lemon drizzle cake but with honey and almonds.  In addition, I can really recommend eating the honey with cheese, in particular a blue cheese.

On leaving we picked up a fresh batch of honey – it is more liquid with a slight haze and looks deliciously yummy.   Grab yours while it’s still in stock as it’s moving fast!

If you would like to find out some more about Henge Honey watch our video interview with Mark – it includes an interesting snippet about a conversation with Heston Blumenthal too!

Find out how bees make honey and beeswax!