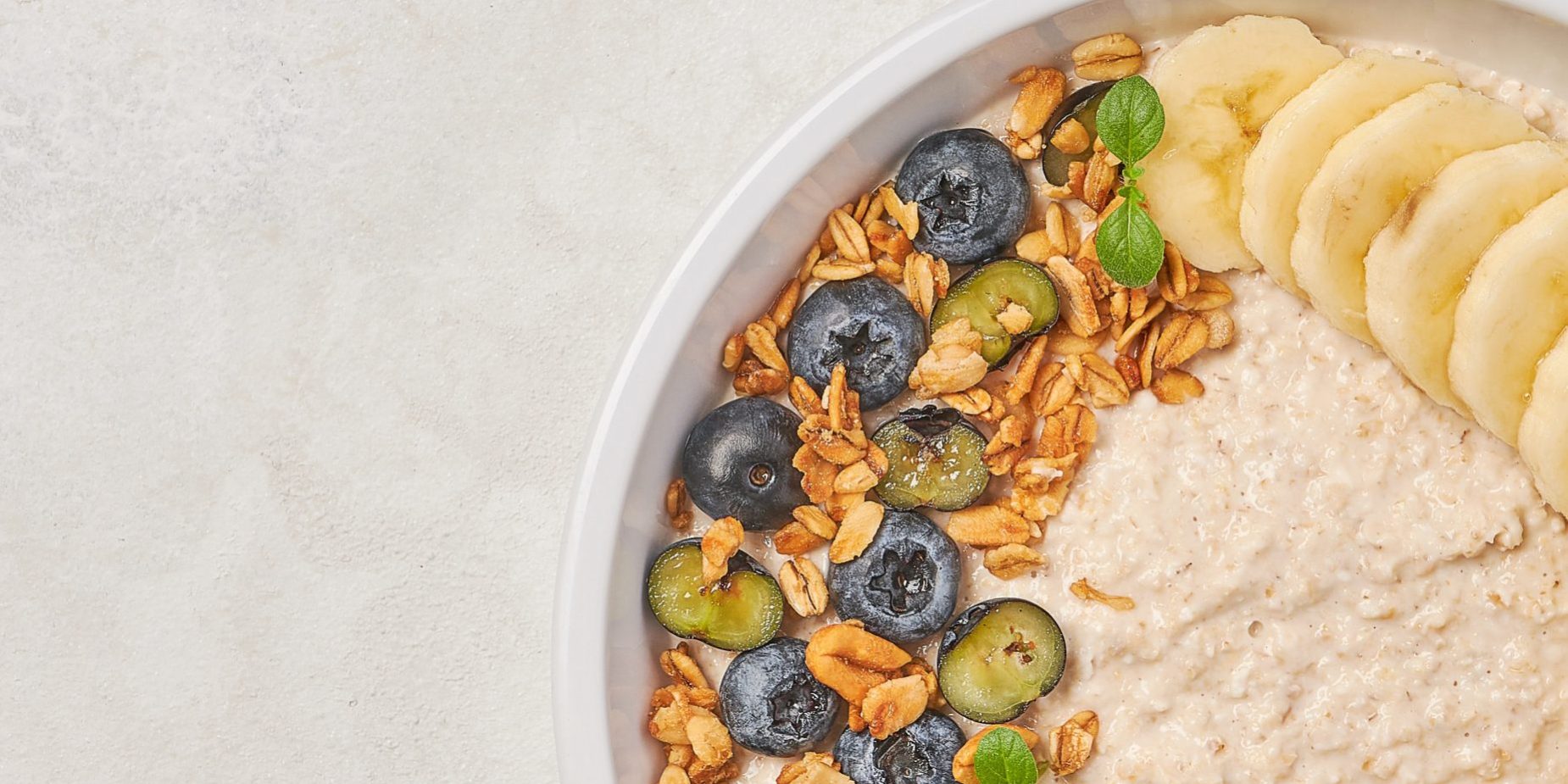 Have breakfast and try not to skip meals

Aim for starchy foods that release energy slowly and try to include a source of protein such as oats or whole-wheat cereal made with semi-skimmed milk or mixed with yogurt.  Alternatively, wholemeal bread with nut spread or eggs or cheese or beans is a great start.

It is recommended to have between 6-8 glasses of fluid per day; some tips to increase your fluid intake include:

The healthiest and cheapest drink is water; tap water is great if you have access to it. For a refreshing boost, you can add slices of lemon, cucumber, mint or berries.

Other drinks such as unsweetened coffee, tea or iced tea, as well as unsweetened, infused or flavoured (sparkling) water count as good choices for hydration if you wanted something different in flavour.

Carry your own refillable water bottle with you and challenge yourself to finish it by the end of the day.

Dehydration occurs when the body does not have enough water and is very dangerous. It is easy to see if you are hydrated, all it takes is one look at your urine. The lighter the colour, the more hydrated you are!

Lighter is always better.  Although coffees are easily available, you should avoid too much caffeine as this can contribute to dehydration and anxiety. It is suggested to limit caffeine to 400mg/day.

Make a change in your sugar and salt consumption

Whether you’re on a low carb or Keto diet, or you need something quick to grab while running out of the door, Breakfast Egg Muffins are a delicious healthy saviour and PERFECT for Meal Prep! Recipe for approximately 6 portions (which should last all week).

In a bowl mix together all of the core ingredients until smooth.

Then add any of the additional ingredients you choose to the bowl. If using bacon, grill first for 10 minutes and then chop before putting it into the bowl.

Put paper cases into a muffin tin and then equally spoon the completed mixture into the cases.

Bake in the oven for 15-18 minutes and leave to cool. You can eat these warm, or you can make them in batch and enjoy taking them with you to work each day. Why not try spinach and feta or bacon and mushroom flavoured muffins? You could even add fresh chilli or chilli flakes to add some spice!

All of these recipes are gluten-free, dairy-free, refined sugar-free and vegan. There are also grain-free and Keto options. From Almond Joy to carrot cake to PB&J, oatmeal has never tasted so amazing! View all the recipes on Life Made Sweeter.

Add the rolled oats with your choice of liquid into a mason jar or resealable container.

Overnight oats are super versatile so at this stage, add any spices or sweetener, great examples are cinnamon or honey.

Seal or cover with a lid and chill in the fridge for at least 4 hours or ideally overnight.

There is a huge range of ways you can customise the flavours. Have fun and mix up the flavours so you can have a different one every day. Try Almond Joy, Apple Cinnamon, Banana Nut, Blueberry, Carrot cake, Peanut butter, & jam, Pumpkin, Strawberry, Keto Overnight oats.

Enjoy them straight from the jar or pour into a bowl and add your favourite toppings.

Make three lunchbox pasta meals in one go to save you time midweek. They’re nutritious and healthy with variations using salmon, chicken and aubergine.

For the pasta base:

For the salmon box:

For the chicken pasta box:

For the aubergine box:

Heat oven to 200C/180C fan/gas 6. Arrange the red onions, red pepper, courgette and aubergine in lines on a large baking sheet. Drizzle with a little oil and roast for 15 mins.

Cook the pasta for 10-12 mins until al dente. While the pasta is cooking, loosely wrap the salmon fillet in foil and do the same with the chicken and pesto in another foil parcel, then put them on another baking tray.

When the veg have had their 15 mins, put the salmon and chicken in the oven and cook for a further 12 mins (or until the chicken is cooked through). Drain the pasta, put in a bowl and toss really well with the lemon zest and juice, rapeseed oil, garlic and two-thirds of the basil. When everything is cooked, add the red onions to the pasta. Toss together and divide between three lunch boxes.

Top the first box with the salmon fillet (remove the skin first), then add the red pepper from the tray. Scatter over the capers and add the rocket.

To the second box, add the chicken and pesto with any juices, the roasted courgette and the halved cherry tomatoes.

In the third box, toss the aubergine into the pasta with the quartered cherry tomatoes, olives and the remaining basil. Seal up each container and chill. Eat within three days, preferably in the order of the salmon, then the chicken and then the aubergine.

Use your favourite soft herbs in this thick grilled omelette with peas, cream cheese and courgette- we like dill, mint and parsley.

Put the potatoes in a pan of salted water, bring to a boil, then simmer for 12-15 mins or until tender. Drain, leave to cool, then thinly slice. Whisk the eggs and egg whites with the milk, garlic, mustard and herbs, and season generously. Add the cream cheese and fold through just a little so that some lumps remain. Heat the grill to medium-high.

Heat the oil over medium heat in a 23cm non-stick frying pan. Add the potatoes and fry for about 5 mins, until they start to turn golden. Add the courgette and chilli flakes, and continue to fry for a couple of mins more. Stir through the petit pois.

Tip the egg mixture into the pan and scatter with the feta and tomatoes. Cook over a gentle heat for 10-12 mins until almost set. Pop the pan under the grill and cook for 3-5 mins until puffed, golden and cooked through. Cut into wedges and serve with a crisp green salad.

Mix the cornflour with the soy sauce and lemon juice in a small bowl.

Heat the oil in a large frying pan or wok over high heat, add the chicken, capsicum, carrot and broccoli and stir-fry for 2–3 minutes, or until the chicken is lightly browned and the vegetables are beginning to soften.

Pour the lemon and soy mixture into the pan, add the chicken stock and spring onions and bring to a simmer. Reduce the heat and cook for 2 minutes, or until the sauce is slightly thickened and the chicken is cooked through, stirring regularly.

Sprinkle with grated lemon zest and serve with rice.

Green tea noodles bring a pop of colour to this easy midweek dinner.

Preheat oven to 220°C. Heat peanut oil in a small saucepan over low heat. Add ginger, long green shallot, lemongrass and a pinch of salt. Cook, stirring occasionally, for 6-8 minutes until long green shallot is very soft but not coloured. Remove from heat and cool.

Meanwhile, combine honey, olive oil and chilli paste in a bowl. Stir to combine. Line a baking tray with baking paper and add salmon. Rub honey mixture over salmon to coat, then season. Roast for 12-15 minutes for medium. Set aside, loosely covered with foil, to rest for 5 minutes.

Cook noodles according to packet instructions. Drain and rinse briefly with warm water.

Whisk lime juice, sugar, fish sauce and chilli flakes into the shallot oil mixture. Place noodles in a large bowl with three quarters of the shallot oil, season and toss to combine. Arrange on a serving platter and flake salmon over the top. Drizzle over remaining shallot oil and scatter with extra chilli flakes, toasted sesame seeds and shiso leaves. Serve at room temperature or chilled.

Quick, easy and pretty as a picture.

Melt butter and oil in a large frying pan over medium-high heat and cook for 3 minutes or until nut brown. Add radish and cook, tossing pan, for 6-8 minutes or until tender. Spoon into a serving bowl.

Drizzle over lemon juice and scatter with sesame seeds and salad leaves. Serve with sourdough and extra lemon.