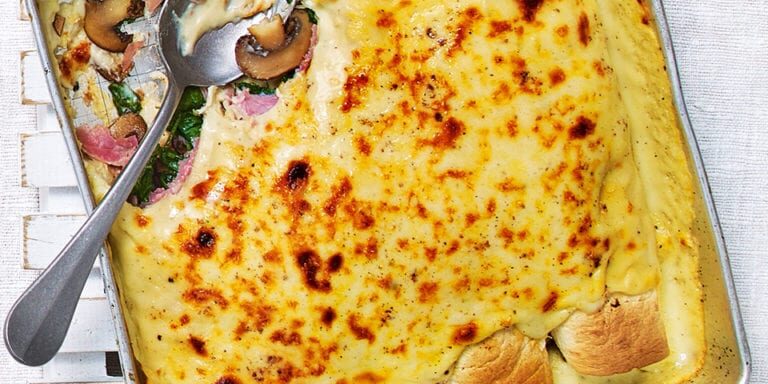 Heat the grill to medium. Melt a knob of butter in a heavy-based saucepan, then fry the sliced mushrooms until golden. Add the spinach and stir until just wilted. Remove with a slotted spoon and set aside to cool. Melt the butter in the same pan, then add the plain flour and stir over a medium heat until it smells toasty. Gradually whisk in the semi-skimmed milk until smooth, then simmer for 5 minutes until thickened. Stir in the grated cheese, a generous grating of nutmeg and salt and pepper to taste.

Divide the mushroom and spinach mixture equally among 8 small tortilla wraps, top each with some ham, then roll into a cylinder and arrange on 1 large or 2 smaller baking trays. Pour over the cheese sauce, then grill until piping hot, golden and bubbling. Serve straightaway with a fresh green salad.