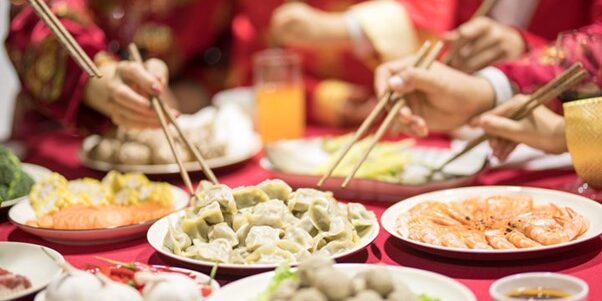 Chinese New Year, also known as Lunar New Year or Spring Festival, is China’s most important festival. It is time for families to be together and a week of an official public holiday.

This year falls on Friday, February 12, 2021, beginning the year of the Ox. with China’s public holidays from February 11–17, 2021.  The date of Chinese New Year is decided by the lunar calendar, the holiday falls on the second moon after the Winter Solstice on December 21st so ever year the New year falls on different dates between January 21st and February 20th.

The festival has a history of over 3,000 years. Over the centuries new traditions were added and celebrations became more entertainment orientated. The main activities include putting up decorations (red is the main colour of the festival), eating reunion dinner with family on New Year’s Eve, firecrackers and fireworks and giving red envelopes and other gifts. Food plays a huge part in the celebrations with specific foods eaten to bring good luck.

Below we have included some Chinese new year inspired dumplings….

Dumplings generally consist of minced meat and finely-chopped vegetables wrapped in a thin and elastic dough skin. Popular fillings are minced pork, diced shrimp, fish, ground chicken, beef, and vegetables. They can be cooked by boiling, steaming, frying or baking.

On New Year’s Eve, it is a tradition to eat dumplings with cabbage and radish, implying that one’s skin will become fair and one’s mood will become gentle. When making dumplings there should be a good number of pleats. If you make the junction too flat, it is thought to purport poverty.

Dumplings should be arranged in lines instead of circles, because circles of dumplings are supposed to mean one’s life will go round in circles, never going anywhere.

How to make dumpling wrappers (or buy ready-made!)

This recipe makes about 35 to 40 dumpling wrappers that are about 12 to 13 grams each and 3 1/4 to 3 1/2 inches in diameter, which is a good medium-size. If you want to make larger dumplings, aim for wrappers that are about 14 or 16 grams, and they’ll roll out to about 3 3/4 inches in diameter. This recipe will make about 30 or so large wrappers. Feel free to adjust the size of each dumpling wrapper to your liking.

For the dipping sauce

These red curry tofu dumplings are great for parties or dinner! Serve them with sweet chilli sauce.

How to make potstickers

NEXT STAGE….. Prepare the Dumpling-Making Station

NEXT STAGE… Cook the Dumplings