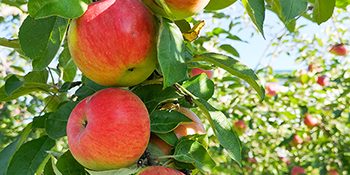 Apple day is an annual celebration of apples and orchards and falls on the 21 October.

In 1990, dismayed by the loss of so many traditional orchards and amazed at the 3,000 or so varieties of apples that have been grown in the UK, it set out to create a new celebration of our most versatile fruit and the beautiful orchards they come from.

To join the celebration we’ve put together some of our favourite apple recipes.  Share yours too on our facebook page.

Heat oven to 220C/fan 200C/gas 7. Roll out the pastry and trim to a round about 35cm across. Transfer to a baking sheet lined with parchment paper.

Peel, core and thinly slice the apples and toss in the lemon juice. Spread over the pastry to within 2cm of the edges. Curl up the edges slightly to stop the juices running off.

Dot the top with the butter and sprinkle with vanilla and caster sugar. Bake for 15-20 mins until the apples are tender and the pastry crisp.

Warm the conserve and brush over the apples and pastry edge. Serve hot with vanilla ice cream or crème fraîche.

Try a fruity version of the classic sticky toffee pudding for a rich after-dinner treat. Serve with cream, custard or vanilla ice cream. (452 kcal per serving)

Heat oven to 180C/fan 160C/gas 4. Grease a 2-litre/3½-pint ovenproof dish lightly with butter. Tip the flour, sugar and baking powder, along with a pinch of salt, into a large bowl. Mix together the milk, butter, egg and vanilla extract and stir into the dry ingredients until you get a smooth batter. Arrange the apples in the dish, spoon the batter on top and smooth with a knife until the apples are covered.

For the topping, pour 250ml boiling water over the sugar and stir together until smooth. Pour the liquid over the pudding mixture, then scatter over the pecans. Bake for about 40 mins until the pudding has risen and is golden. Use a big spoon to serve the pudding, making sure you get some of the gooey caramel sauce covering the bottom of the dish. Serve with pouring cream, warm custard or vanilla ice cream.

These apple and pear muffins are packed with fruit to give them an autumnal flavour, and a good dash of cider keeps them moist. These muffins are best eaten the day you make them but they’ll keep for up to 2 days in an airtight container – just gently warm in a low oven to refresh before serving. (261 kcal per serving)

To make enough stewed apple, peel, halve, core and roughly chop a 160g cooking apple, then cook over a medium heat until smooth.

Put the yogurt, oil, sugar, apples and eggs in a large mixing bowl and whisk until smooth. Pour over the cider and whisk again.

Add the flour, baking powder, spices and chopped pears, then fold everything together until just combined, being careful not to overmix the batter as this can make the muffins dense and tough.

Divide the mixture evenly among the muffin cases, then top each with pear slices. Bake for 40-45 minutes until risen, golden and a skewer pushed into the middle of a muffin comes out clean.

Remove the muffins from the tin and brush the tops with runny honey, if using. Allow them to cool, then wrap as gifts or store in a sealed container until ready to eat.

The apples are roasted first to release their natural sugars and intensify their flavour. Baked into fluffy sweet soufflés and served with a salted caramel sauce, this is a show stopping dessert worthy of a special occasion. (460 kcal per serving)

For the salted caramel sauce

Heat the oven to 200°C/180°C fan/ gas 6. Brush melted butter all over the insides of the ramekins. Put the apples in a baking dish, sprinkle with the muscovado sugar and cinnamon, add the vanilla seeds and pod, then cook for 45 minutes, tossing occasionally, until soft.

Remove the vanilla pod, spoon the apples and any juices into a food processor, then whizz to a purée. Add the egg yolks, whizz, then transfer to a mixing bowl. Turn up the oven to 220°C/200°C fan/gas 7.

Meanwhile make the salted caramel sauce. Put the cream, vanilla seeds and pod in a saucepan and bring to a simmer. Heat a large frying pan over a medium-high heat and add the 190g golden caster sugar, a spoonful at a time, allowing each addition to melt before adding the next. Bubble until it forms a deep amber caramel (make sure it doesn’t burn). Remove the vanilla pod from the cream, then pour it over the caramel (be careful – it may spit), whisking over a medium heat until incorporated. Whisk in the butter, piece by piece, to create a glossy sauce. Keep warm (see Make Ahead).

Break the sponge fingers into 1-2cm pieces and put in the bases of the ramekins. Drizzle with the calvados. Put a baking sheet in the oven to heat up.

Put the egg whites in a clean mixing bowl. Whisk to stiff peaks with an electric mixer, then add the 75g golden caster sugar a spoonful at a time, whisking back to stiff peaks after each addition, until all the sugar is incorporated.

Mix a spoonful of meringue into the apple purée to loosen, then gently fold the purée into the meringue using a large metal spoon in a figure-of-eight motion. Divide among the ramekins. Use a palette knife to level the tops, then run the tip of a table knife around each soufflé (see tips). Put the ramekins on the hot baking tray in the oven.

Bake for 12-15 minutes until risen and golden but still with a slight wobble in the centre. Dust with icing sugar, then serve immediately with the caramel sauce.

This rich, buttery apple cake has slices of apple baked into the sponge, and a crunchy crumble topping. It’s the ultimate cake for anyone who loves apple crumble.  (568 kcal per serving)

For the apple crumble topping

Heat the oven to 180°C/160°C fan/gas 4. Toss the bramley apples with the lemon juice in a medium mixing bowl. In a larger mixing bowl, use an electric mixer to cream together the 225g butter, caster sugar and lemon zest until pale and fluffy. Beat in the eggs one at a time, adding  a little flour with each.

Using a large metal spoon, gently fold in the remaining flour and the cinnamon, baking powder and ground almonds. Drain the apple pieces well, pat dry with kitchen paper, then stir into the cake batter (discard any juice left in the bowl).

Spoon the batter into the tin, gently level, then bake for 45 minutes.

As soon as the cake goes in the oven, make the topping. Melt the butter in a frying pan, then add the sliced apples and cook for 2-3 minutes, turning, to caramelise. Leave to cool. In a bowl, rub the butter and flour between your fingertips to a coarse breadcrumb-like mixture. Stir in the sugar, cinnamon and a pinch of salt, then toss with the cooled apple.

After the cake has had its 45 minutes in the oven, take it out, then sprinkle the crumble over the top and bake for 15-20 minutes. The cake is ready when the crumble topping is evenly golden brown and the cake feels firm to the touch.

Cool in the tin for 10 minutes, then remove from the tin and put on  a serving plate. Serve warm or leave to cool